Less More
3 years 1 month ago #20594 by IronyMan
Replied by IronyMan on topic IronDuke's I-War2 Remake/I-War3
Alrighty, I may have to give Unity a shot then. I'll see what I can do with it and Blender this weekend.

Less More
3 years 1 week ago #20603 by IronDuke
Replied by IronDuke on topic IronDuke's I-War2 Remake/I-War3
Looky what I did! 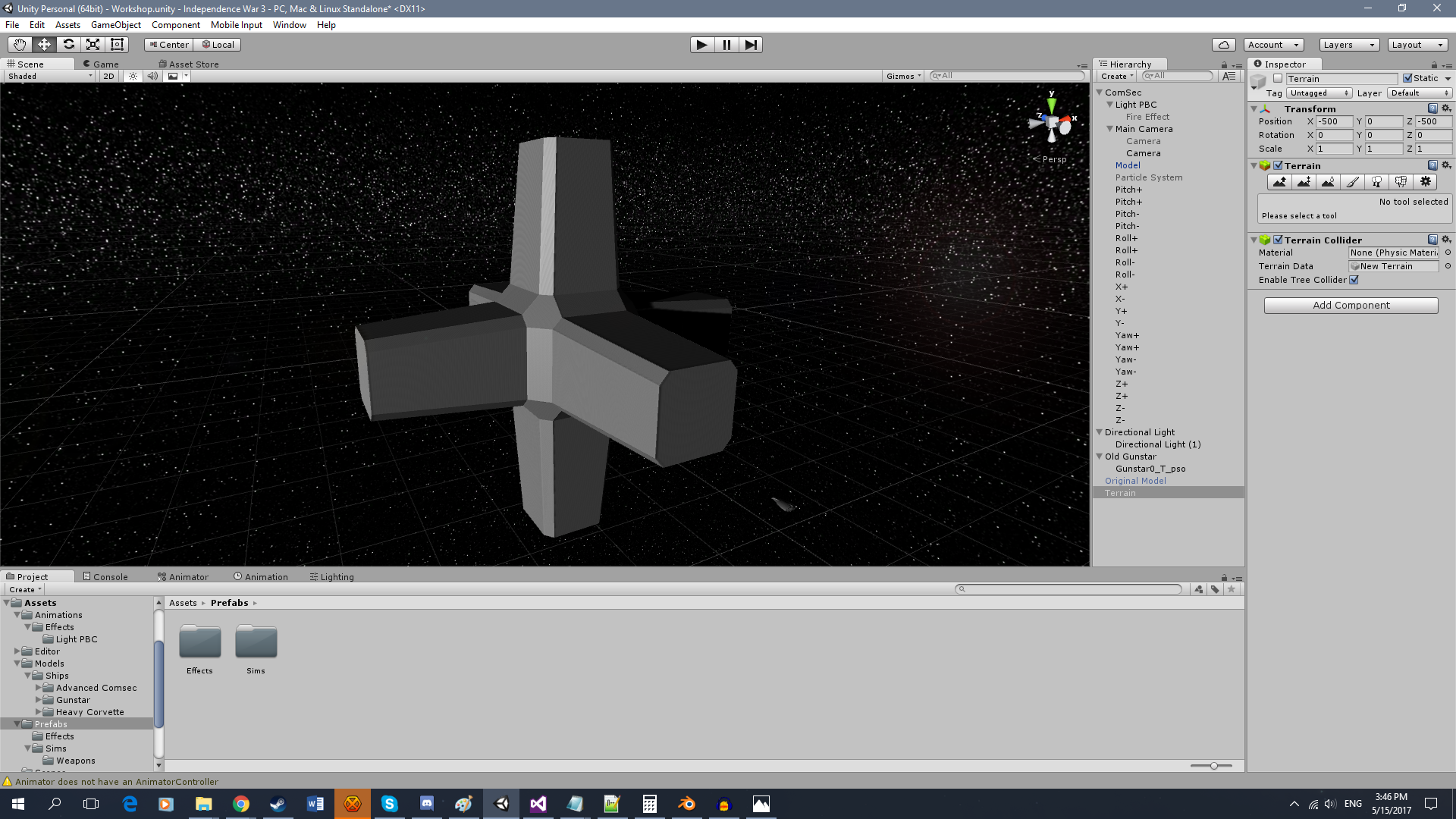 So I put these on: 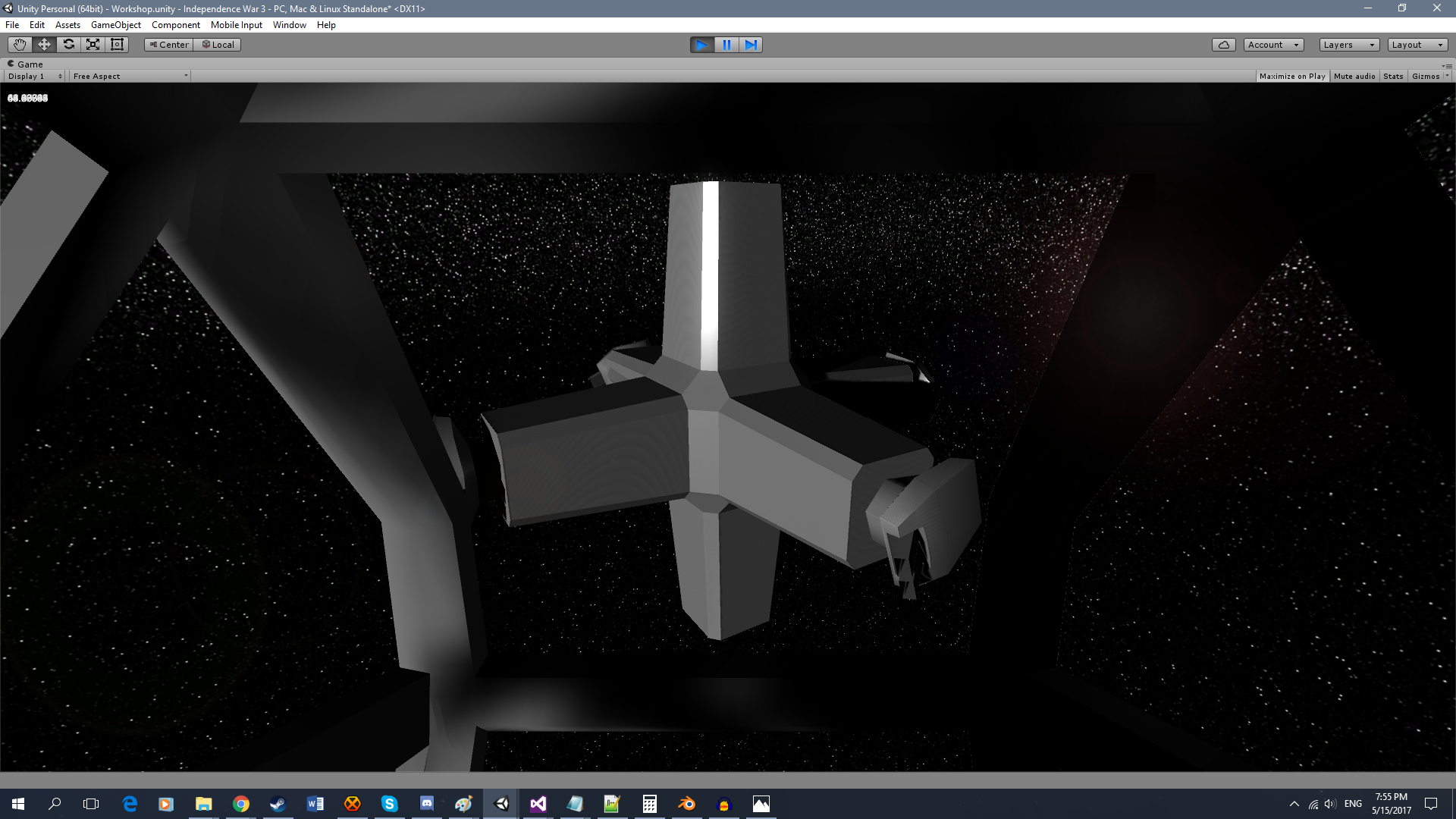 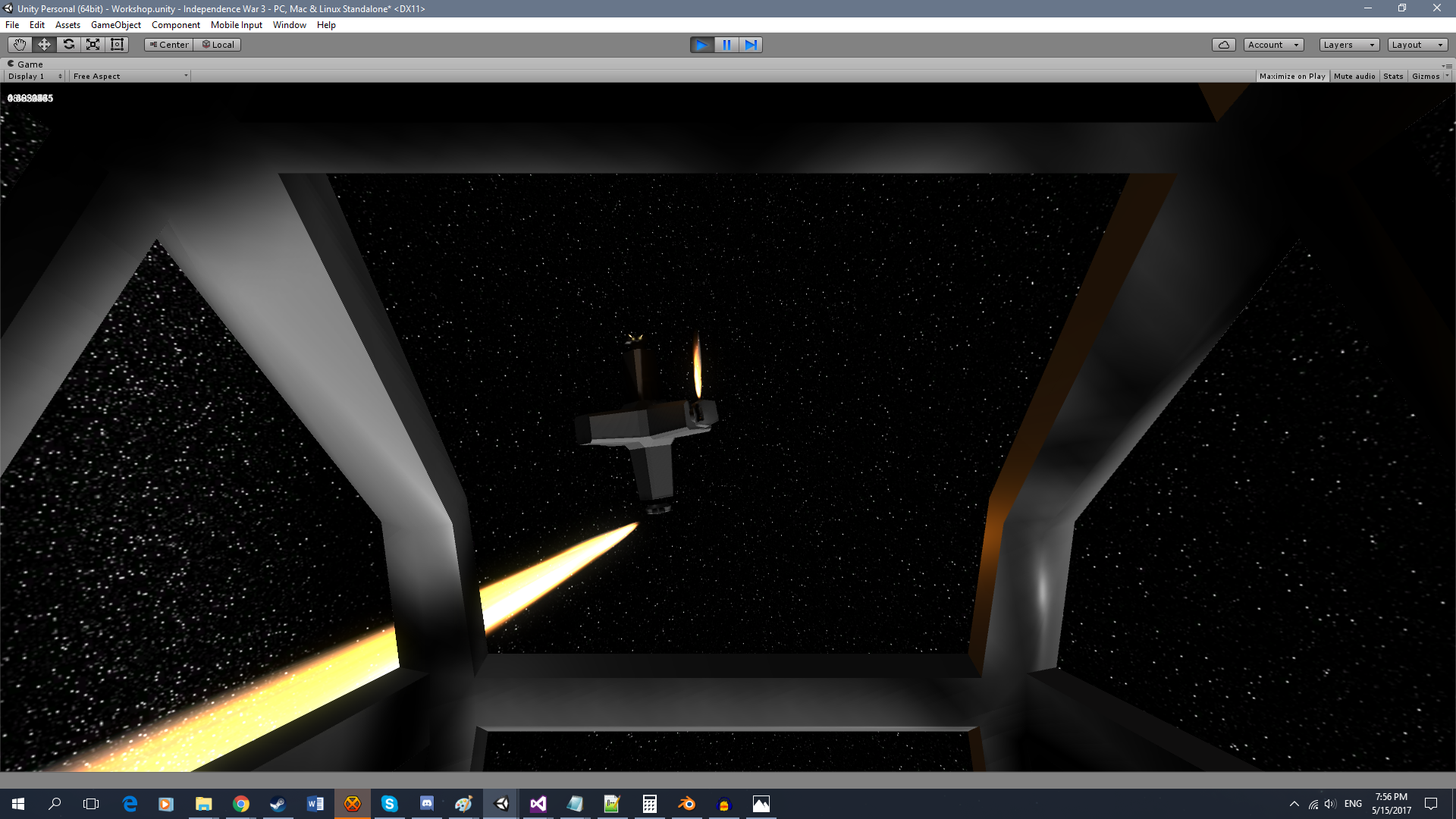 However, you can bite back! 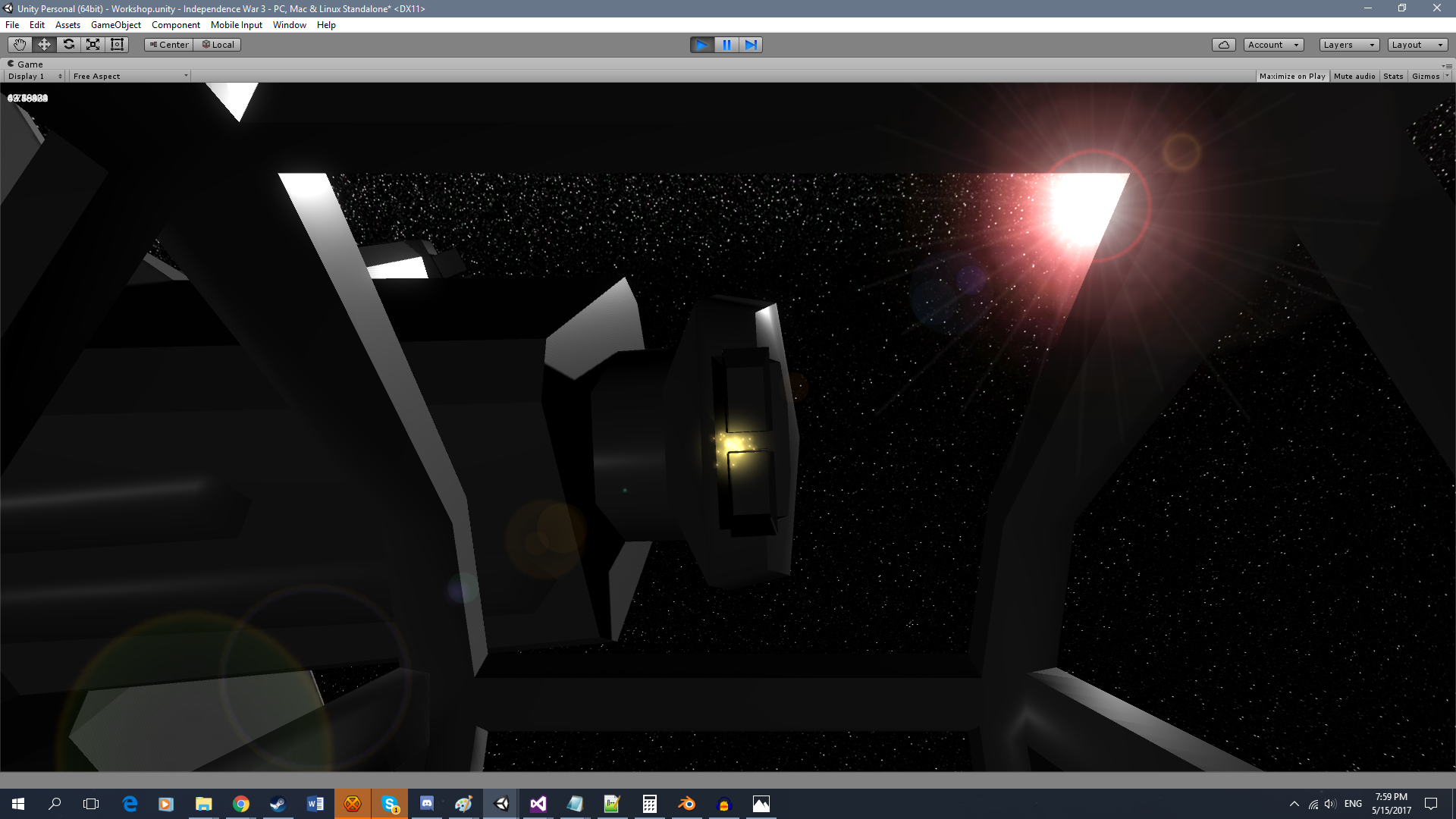 ), plus finalized the Comsec's flight model balancing, I promise to record a short video of myself flying the Comsec against the Gunstar.

The only weapon in game ATM is the Light PBC. It travels at the correct speed of 4,500 m/s, makes the correct sound both upon firing and hitting, but doesn't use the original image file because I can't seem to find where I stuck my pile of converted SFX textures for the game. Any other weapon can be added simply by changing the stats and effects.

The turrets on the Gunstar are fully simulated by physics - a motor turns them, and they have real colliders, unlike the vanilla game's turrets. If I were to press against a turret with enough force, I could likely turn it somewhat. The good news is that the gimballed weapons ingame can be done simply by using turrets with 45 degree horizontal and vertical tracking.

Not done yet though. I did stick weapon jitter in already.

I'll also work on sticking in a missile script I wrote for another project. It can predict target velocity and everything, and assuming you give it a strong enough thruster, is actually pretty hard to dodge. Beam weapons are imminent as well; that is another simple copy-paste.

No textures, obviously. Those aren't coming until I've remodeled the 3-D models. I'm just copy-pasting the originals to get the game mechanics in place solid.

The PBC bolts use a special raycast collision detector that I coded. Your shots absolutely positively cannot ever pass through a target and fail to detect it, assuming I did this right.

I also have an extremely evil plan for using particle systems to make rapid-fire infantry-type weapons. Might not come to anything, or might only be used for point-defense cannons, but I've been wanting to make one of these systems for a while now.

No shields implemented at the moment; that shall also change soon. I-War 2's main focus is combat; hence, I'm implementing all the combat mechanics first to make sure they're solid before I do anything else. Plus, this means a Unity-made Instant Action will reach you guys sooner.

I also can't wait to see what sort of eye candy I can pull off for things like LDS and capsule space.

--IronDuke
I-War 2 Discord: discord.gg/RWaabWB
Very little about the game is not known to me. Any questions you got, throw them at me.

I can only hope you can actually complete the entire project before you get sick of it. If so, this looks to be pretty epic.

Less More
3 years 1 week ago #20605 by IronyMan
Replied by IronyMan on topic IronDuke's I-War2 Remake/I-War3
Dang. I'm impressed. Have you implemented functional thrusters on the ship yet? That may be what I'm most looking forward to.

Even with the system damage ramped way up in the vanilla game I never had the feeling that my ship could be really crippled by a critical hit; other ships never used disruptors in combat, and the engines couldn't be individually damaged.

I am super pumped for this. Gonna look into modeling and working with Unity over the summer; maybe I'll be able to contribute something.

Keep it up man, you're doing great.

If Atari ever decides to make a sequel, they should hire you.

Less More
3 years 1 week ago #20607 by Chessking
Replied by Chessking on topic IronDuke's I-War2 Remake/I-War3
I have recently implemented LDA shields into EOC 2-D, including rendering an LDA image. My question is, will you be able to use the LDA image from the actual game? If not, I can make one for you pretty easily. Unless the image has to be mapped to a convex mesh... in which case it will be the perfect warm-up for ship re-texturing.

This is one tough navy, boy. They don't give you time off, even for being dead. -Clay